A Blues and Beloved Beta-Chi Brother 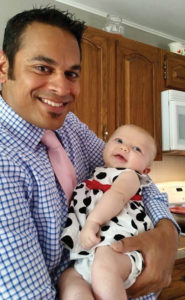 The St. Louis Blues’ victory over the Dallas Stars in game one of the second round of the Stanley Cup Playoffs was bittersweet for the multitude of Blues fans who were close with Ketan Patel ’00. When “Gloria” played and fans joined in singing “When the Blues go marching in,” Ketan was not in Enterprise Center leading the celebration. The win came just four days after Ketan entered Chapter Celestial at the age of 38.

“At the Blues games, Ketan was not just another fan in the stands. He was part of the experience of going to a Blues game, especially for anyone within earshot of section 307,” Ryan Bequette ’02 said. “The people that sat behind us would oftentimes bring their daughters, and I’m convinced that those girls didn’t come to see the Blues. They came to see Ketan and shout ‘Let’s Go, Blues!’ with him. Between periods, if you were an opposing team’s fan, you quickly learned to avoid section 307 or suffer the wrath of Ketan and his never-ending supply of boos.’”

Attending Blues games with his Kappa Sigma Brothers was among Ketan’s favorite things to do. As the Blues went on to win their first Stanley Cup in franchise history, Ketan was on the forefront of the minds of his Beta-Chi Brothers and several other Blues fans. Just hours before the Blues upended the Boston Bruins in Game 7 of the Stanley Cup Finals, @StLouisGameTime, the Blues SB Nation affiliate, tweeted, “Today I’m thinking about our first head vendor, John Nicolay, who died in July 2013, and my friend, @k10patel, who died this year. And all the other Blues fans we’ve lost who would be loving every minute of this.”

Ketan’s loyalty to the Blues and the Beta-Chi Chapter were one in the same. The larger-than-life personality that Ketan brought to Beta-Chi played a huge role in the success of our Chapter.

“There is no question that without having Ketan in my life, things would be very different for me. I wouldn’t have joined the brotherhood of Kappa Sigma, where I’ve met some of the best friends I will ever know,” Ryan said. “In joining Kappa Sigma, I probably partied a little too hard and studied too little, so my career path could have looked very different. With a different career path, I wouldn’t have met Alexandra and have the family I have today. Ketan, directly and indirectly, has had a profound impact on my life, and I could never thank him enough for that.”

While reading the end of Ketan’s eulogy, Ryan acknowledged that Ketan was someone who earned the privilege of wearing the Star and Crescent. Ketan was a gentleman, a man of honor and courage, a man of zeal, yet humble, an intelligent man, a man of truth, one who tempers action with wisdom and, above all else, one who walks in the light of God. Andy Allen ’96 said that Ketan was as much a part of his Kappa Sigma Brothers’ families as his own.

“Even though his time was cut short, Ketan certainly made his mark on all of us here today,” Ryan said. “Ketan was a friend, a co-worker, a mentor, a brother, a son, a godfather, a teammate, a husband, a clinically diagnosable St. Louis Blues fanatic, and he was my Big Brother.” 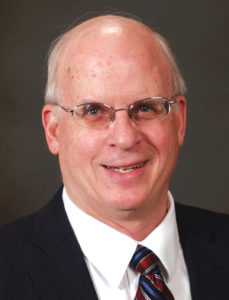 The countless hours of research that Eric Norman ’60 has conducted as the president of Norman Clinical Lab since 1985 has been well-documented. Eric’s main claim to fame is launching a urine test for B12 deficiency that was more accurate than the blood test and went on to be used around the world.

Numerous colleagues, professors, and role models have pitched in to Eric’s success throughout his career. One group Eric is particularly thankful for is the Kappa Sigma Beta-Chi brotherhood. The pillars of fellowship, leadership, scholarship, and service positioned Eric to be successful in and out of the lab.

“We all studied pretty hard,” Eric said. “With the friendships I made, I’ve kept in touch with a number of people over the years. It was a good school and the camaraderie kept us studying, so it benefited me later in life.”

Eric had a good impression of Kappa Sigma from his older brother, who was a member of the Fraternity for two years at the University of Missouri. Since the dorms were full at Missouri School of Mines when Eric was accepted, he stayed at the Beta-Chi Chapter House during recruitment week and went on to live there for the next four and a half years. Eric represented Beta-Chi well academically and in intramurals.

“I competed in intramural boxing and won three championships,” Eric said. “I played bridge and we won the intervarsity bridge championship. I enjoyed mixing with the Brothers, getting together and building friendships.”

The service pillar is firmly instilled in Eric through his faith and work in the community. He has served as a deacon in the Baptist church for the past 42 years. Eric has been on nine multi-week mission trips to Africa, seven to Uganda and two to Ghana. He has also been a loyal supporter of the Boy Scouts.

One of Eric’s recent honors is a testament not only to his research, but his overall character. In 2018, Eric received the Albert Nelson Marquis Lifetime Achievement Award. Eric has remained humble in everything he has accomplished.

Eric and his wife, Claudia, have happily shared nearly 46 years of marriage. They are the proud parents of five children and enjoy spending time with their six grandchildren.

You can connect with Eric at b12tester@aol.com.

To read past alumni spotlights click the links below.

"I owe a lot of my success to Beta-Chi; it motivated me to come back every semester and finish school. Being a chapter officer taught me lessons in life I might not have learned if I weren’t in Kappa Sigma. The Fraternity is a positive influence and excellent network."
‐ Jim Von Behren ’80, Beta Chi